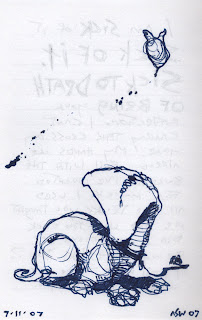 Watch out for those things that want your heart for breakfast.
Posted by Elephantiasis at 7:10 PM 5 comments: Links to this post

I hate this guy. I mean really hate, with the passion burning inside the hearts of a million white-hot suns. Somehow he became a part of me, a tapeworm, a botfly larva, a dreaded candiru lodged where no fish should be. I wasn't aware of it at the time. Funny thing is, he's part of a mechanism that protected me for years, ages even, but he's the worst part. The most overt part. The part I'd most like to whip until he was a liquid and pour down the drain. 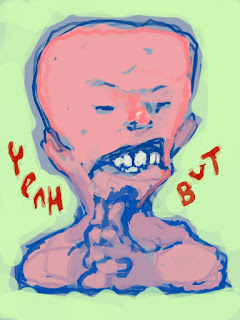 There is one thing I know about personal demons, though, and it's a big secret. It's gremlin-shattering stuff. Demons do not want to be drawn. Ever. Ev-ver. They don't like the light, you see. Their power is greatest when they're safely behind the curtains, pulling all the strings. Bring them out into the open and--you might--just--

Heaven knows what would happen after that.

Nope, on second thought it's too dangerous. Just pretend I never wrote Yeah-But's Big Secret. You can keep a secret, right?
Posted by Elephantiasis at 6:26 PM 4 comments: Links to this post