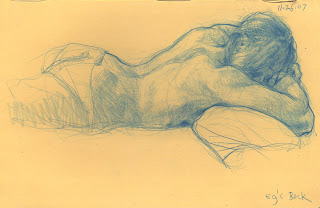 My demon: the human figure.

I've let it mock me for years. I've started to regain my chops, only to stop again.

Something about the human figure scares the hell out of me.

(A phrase I learned from my lovely ex, who remains my friend and occasionally whacks me over the head when I need it.)
Posted by Elephantiasis at 7:40 PM 3 comments: Links to this post

And Now, a Message from your Muse.

Hey. We need to talk.

I'm a little concerned. Peeved, actually. You may have noticed that, since I've been stingy with you lately. I bet you'd like to know why. Yes? Well then, sit back and listen.

See, you've forgotten a few things. For instance: you're a conduit. You don't own me. We have a relationship. When you abuse that relationship, you get yourself into trouble. Do you need me to remind you what's considered abuse?

Laziness. Don't take me for granted, babe. I'm not your palace eunuch. You don't grow your skills by sitting on your butt. Cholesterol clogs your arteries. Complacency clogs the conduit. That's you, remember? I'll still be here when you get around to improving yourself. Chances are we'll get along even better. It's up to you to get the ball rolling.

Self-abuse. No, not that kind of self-abuse. The other kind. The “I totally suck so what's the point” kind. I can't come through if you close the pipe at your end. Being capable of self-analysis is one thing, but dude! Ix-nay on the agellelation-flay. (Also, it gets tedious after a while.)

Arrogance. Think you're the greatest thing since sliced bread? Go stop a train with your tongue if you want people to treat you like a God. Until then, shut the hell up. Nobody gets to dictate what the world thinks of them, or what legacy they'll leave behind. Drop the facade and just be the conduit. Let your work speak for you, not your ego. Too much ego makes the muse fickle.

Being scatterbrained. Focus, my precious. One thing at a time. Too much pressure does the same thing as all the other abuses, it closes the pipe. Get good at one thing and then move on to the next. People, bushes, seashells, water, whatever it is, take one thing at a time and get good at that before moving on. Everything else will wait until you're open for a new challenge. Laziness and too much expectation give you the same results in the end.

Hyperfocus. As arrogance is to self-abuse, getting obsessive is to being scatterbrained. I can't stop you from drawing anime girls constantly, no, but when you finally bother to blink and look around you'll find yourself in a nice little cage, one you made all by yourself, and the real world will be somewhere very very very very very far away. Good luck with that.

It is a human gift, being able to open yourself to the muse. You've done some amazing stuff when I was there and you weren't. Confused? You shouldn't be. Next time you wake up after having sketched away four hours of your life, go run into the bathroom and take a gander in the mirror. You just might catch a glimpse of me.

Remember this. The better you treat yourself, the better we'll get along. The more respect you show your gifts, the more those gifts will reward you.

Remember that the gift you have is something bigger than you.

That's what will keep me around.
Posted by Elephantiasis at 10:08 PM 7 comments: Links to this post

And then came the waves of laughing gas.

Elephantiasis is back. I bring you eczema and cupcakes.

News at eleven.
Posted by Elephantiasis at 7:17 PM 4 comments: Links to this post