The End of the Road. 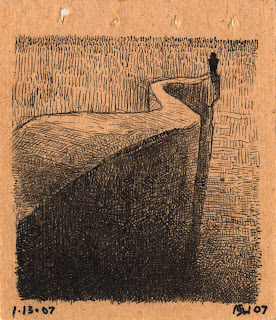 The end of the road represents a choice. You can choose a new direction and move on.

The depressive's addendum to that moldy oldie "when one door closes, another one opens" is good to remember when you're trying to change where your feet tend to take you. (Hopefully you'll forgive the mixing of metaphors. That appears to be the leading indicator of today's personal climate.) The mentally ill know better than most how the doors tend to change shape the more you insist on the downward ride; how they get to be smaller, bleaker, less inviting, until the roads they lead to disappear into trackless forest.

The doors behind you often wind up locked. That's the toll for the road you've taken.

Don't give up on creating change within yourself but let go of the need for absolution. Changing your behavior is the best thing you can do for earning forgiveness. Just don't count on it. Don't expect it. Try to be a better person right now, this minute, then the next, and again, and again. Good habits accrue as the bad ones do, step by step. The straightest roads meander. Should they bend back towards a door that was once locked and you discover it's open again, celebrate your own growth for an instant. Absorb what it feels like to recover lost ground.

Big doors lead to smaller ones on bad roads. Make yourself turn around.

Posted by Elephantiasis at 8:57 AM No comments: Links to this post

A High Note on Drama.


The Holidays have come back around. 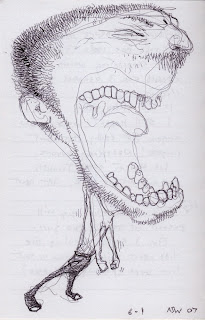 We hate certain cliches for their obnoxious condescending truth like we hate listening to a singer whose voice we can't stand. It doesn't matter to me that Jimmy Corrigan is a rock star, nor (more importantly, for the sake of this analogy) that he's hitting his notes spot-on. I don't want to hear him doing it. If he happens to be singing about something that speaks directly to my experience in a chiding way I am even less inclined to tolerance.

The cliche I'm thinking of is "you can only change yourself".

Yes, it's true. Sure it is. It provides little comfort when you're awash in family disharmony.

I will find my way through to loving those I care for without getting hung up on old thorns. I know how to get there. I got the basic pattern down from digging my way to Dad's self-murder and back out again and the prospect of being a disassembled motorbike scattered across my life's living room floor is endurable for the prize I know is waiting at the end of the grind. Self-work is always worth it. Whether you get the spark from Jung, or the Torah, or Tony Robbins carries less weight than the good you can do from a place of peace. I don't hold with the idea that God only shines light on those who do good in the Authorized Way. That's not the model that produced Mahatma Ghandi nor Martin Luther King...or Jesus, for that matter. Doing good is foundational more than fundamental.

It's a hard row to hoe. Sometimes I can see past the button-pushing, crazy-making family patterning to all the things I admire and love. Much of the time I'm holding the scream back right behind my teeth.


The first rock opera I ever heard was Pete Townsend's collaboration with the London Philharmonic Orchestra, "Tommy". It came in a big two-record set with a full-color insert whose contents were partly graphic--illustrations in a style like Peter Max on acid, or is that redundant?--partly artfully-staged photographs. Here's Tommy's pinball machine on the beach. Here it is, nestled amongst scrub and deadwood. Here's the chrome of the pinball containing the world in mirrored backwards perfection. Here's Cousin Kevin, made out of thick plasticized strokes the width of your thumb, and here's the chair he used to torture Tommy, the stylized chunks of glass rising from the seat in jagged mountain ranges. 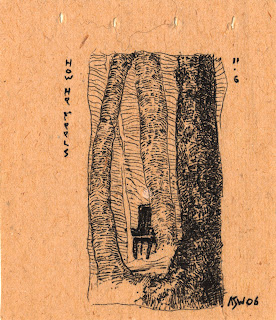 The metaphor of the chair was a regular feature in my therapy drawings. It wasn't a conscious choice on my part. I made the connection six years after I began drawing my way through healing. The messages in the photographs and art from Tommy penetrated deep and so cleanly I needed the shock of therapy to understand how profoundly they'd affected me. This is a chair, and also a prison cell, and a panic room with glass walls, a baby's crib and the dentist's chair from Marathon Man, where I played both Dustin Hoffman and Sir Lawrence Olivier. The chair was where I was supposed to be.

Pete and his buddies put that kid Tommy through an awful lot of crap. He witnesses his father murdering his mother's lover. Mother and father demand he blot the event from his memory. Tommy's a dutiful little kid and he does what any child desperate for his parent's love would do. He finds a way to bend to their will. He makes himself deaf, dumb and blind.

That doesn't sound outrageous to me. Adults put their kids through jarring realignments of what equals security all the time. What wouldn't you do to stay in the shelter of your parent's shadow? What would you sacrifice to keep them together if they were getting divorced? What would you willingly become to make one parent happy after the other has died? A puppet? A perfect student? A hellion? A china doll? A perpetual child? 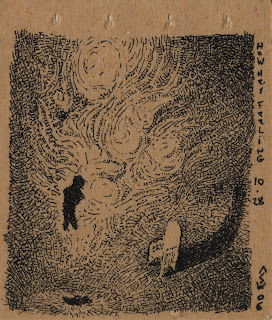 Tommy's spell is broken when his mother shatters his mirror, the only physical thing he's reacted with since the murder. Does that mean his mirror was like a projection screen for his mind's eye? Maybe that was the idea. It sets him free. The circle is broken and he spills into the world as a prophet.

I have never experienced one overwhelming shift in self-perception from which all the days that followed were free of old weights (or chairs). My revelations have come as fast as I've been able to handle them. Sometimes that's in been in bunches, like a fistful of grapes. More often it's been a slog. I got out of my chair like an agoraphobic going to the grocery store, slowly, hesitantly, resentfully. Comfort and confinement combined make you a junkie for dependence. I hated that I hated letting go of such a crippling thing.

The chair rests discarded in the attic of my head. I stumble across it now and then. I know I don't fit there any more. You can't blame a guy for trying. It's scary out there.

May tomorrow give you many reminders of what you have to be thankful for. May you face no Cousin Kevins or Uncle Ernies over the dinner table. I wish you love and to be loved in return.

May you be free.
Posted by Elephantiasis at 4:02 PM 3 comments: Links to this post 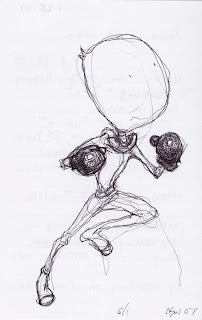 Confidence. Does anybody have that stuff bottled?

Who's to say they'd sell it to you, if they did.

You have to go get it for yourself.

I've learned an interesting tidbit about the world, though. It's a little fact with a great right hook. Here it comes. We're all born to fall for good eventually. We come equipped with the bounce to get back up as well. It's the force that keeps us loving when there seems to be no point to living. The bounce gives you the power to make a reason for living all by yourself.

If you've got that bounce in spades, bless your little pointed head, but if that bounce is hard to find, as it sometimes is for all of us, keep on trying anyway.

Fake it until you can make it. Don't let your opponent fool you into believing anything less. Everyone is going to fall in the end. Get in there and swing like fury. You can get back up, so go.

Swing.
Posted by Elephantiasis at 4:11 PM No comments: Links to this post 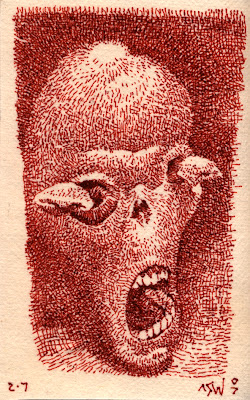 Posted by Elephantiasis at 8:58 AM 2 comments: Links to this post 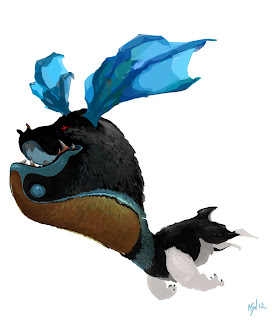 Happy Thursday! Have an Addidasaurus!

Turns out these rare beasties are found in my neck of the woods! Who knew? They tend to be a damn sight shaggier (and are hybridized with Columbia hiking boots instead of running shoes) but every bit as friendly. Feed 'em Ju-Ju Bees and they'll do Immelmanns for you!
Posted by Elephantiasis at 7:45 PM No comments: Links to this post