....since it's been (GACK) two months and change since the LAST post, I give you a little thingie from the class I'm teaching at LCAD. 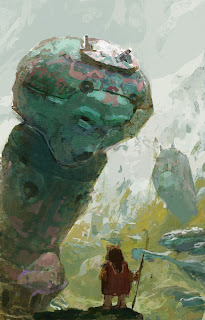 Back in October (is it already nearly December? Really?) I was given the opportunity to do another demo at the Laguna College of Art and Design. I decided to try something that was one-fifth instruction, four-fifths participation; I called it Design-0-Matic. Games often go through multiple incarnations between the Blue Sky phase and production. It boggles me how often this is true, but I swear to Vishnu it's the truth. Well, that's what we did over the space of an hour and change--take a game concept through five different iterations in ten-minute increments. I acted as the Art Director and divided the students into Character, Creature and Vehicle groups. Every ten minutes you were expected to crank out a few designs based on the reference I provided. At the end of this period you'd hand your sketch over to the person on your right, take the design from the person on your left, place that in front of you and, with a fresh piece of paper, re-interpret that design based on the new reference I put on-screen. We went from a gritty FPS concept to a fighting game, a sci-fi adventure game, an open-world/mmo hybrid and finally a fantasy adventure game riffing off Shadow of the Colossus. Sound insane? It was, but it was also a ton of fun. Big massive thanks to Jason Scheier for sticking around and sketching with the Vehicle crew!

I used the work from that session as the basis for a school assignment in my Digital Painting class. The painting above came from an online session a few weeks ago. This and more such stuff will show up at the blog, and soon! I still have about a hundred pieces of art to post. (It was a productive session.)

Enjoy, have a wonderful Turkey Day, and I will see you on the far side of our communal tryptophan-induced coma.
Posted by Elephantiasis at 9:36 AM 12 comments: Links to this post